Everything that hangs on my wall has a story, some meaning, something special to me. Nothing ends up there by accident. A tour of the art in my lounge room goes something like this: 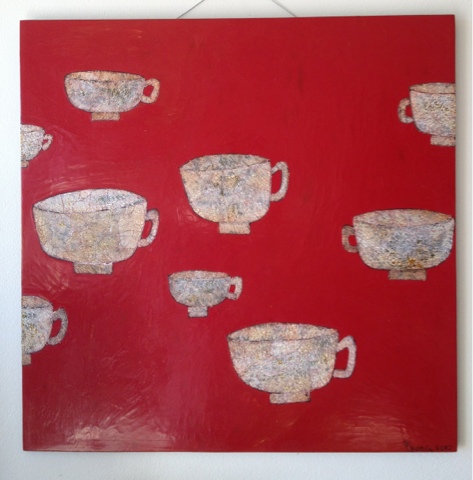 This is a lacquer-work piece by an artist named Phong. I bought it at the sweetest little gallery in Hoi An and then had to lug it all over Vietnam! And it is heavy. But it was worth it. I love the shape of the tea cups. I was worried about getting it back into the country because it is painted onto a wooden surface. The customs officer was less worried about the wood and more worried about the crushed shell that makes up the teacups! I hadn't even thought about that! 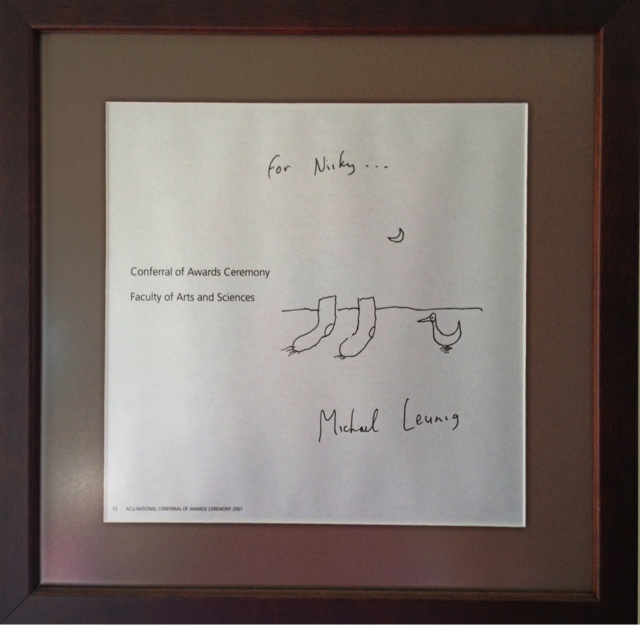 A Michael Leunig Original! My pride and joy, drawn for me at a graduation ceremony in Melbourne, 2007. Michael was an Honorary Doctorate recipient and in the lead up to the ceremony I had been liaising with him about the ceremony details, including regalia and yes... socks. Thanks Michael - I love it. 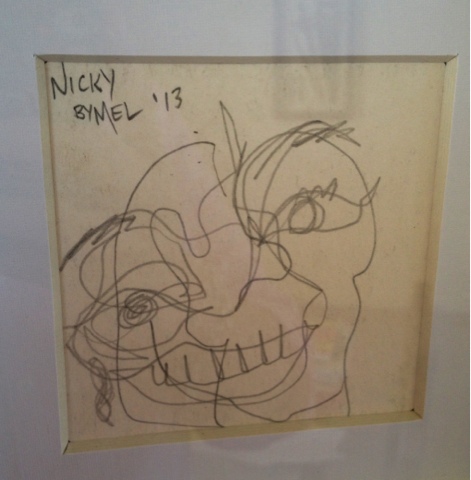 My very clever friend, Mel Cramp, drew this portrait of me. A continuous line drawing without looking at the paper, oh wait, I mean coaster. This was done in the pub, on the back of a coaster. Mel, the resemblance is uncanny! 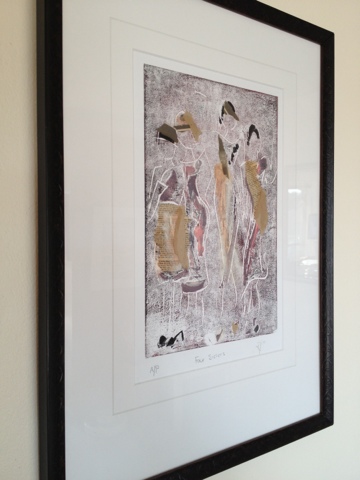 Oh I love this one. The gorgeous and talented Rebecca Hillis is the artist responsible for 'Four Sisters'. It appealed instantly and I love it everyday I see it. You can check out Bec's work at https://www.facebook.com/rebeccahillisartist 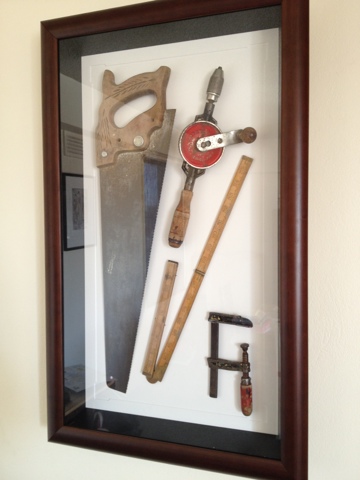 Do you call it art? Dunno. Is it special? Absolutely. These tools belonged to my Dad, a carpenter, who passed away in 1974. A friend of his recently returned them to my mum and I scored a few to put in a frame. I think Wendy at Riverina Framers did a most wonderful job. 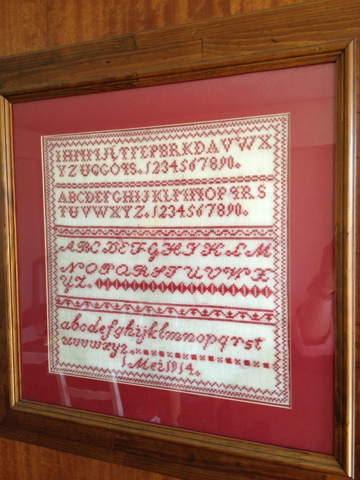 Next year, this piece will be 100 years old. My darling Nanna, Leny van Wel, stitched this in 1914, when she was 9 years old. The date at the bottom '1 Mei 1914' is what I am most thankful for about this piece. I only wish she had stitched her name or at least her initials somewhere on the sampler.
So there you have it, the art of my lounge room. I love each piece, each for its own reason. I hope you have enjoyed this little glimpse at the art in my lounge room.
Posted by nickya73 at 03:59 2 comments:

I love creativity. I am still trying to discover a love for drawing. I struggle. Big time. My head says 'Just put the lines on the page'. My hand just doesn't seem to understand.
I've been told that if I persist, I will get better (I do believe you Kath, I really do) but truth be known, I am not really seeing much progress.
Now I have come up against my biggest drawing challenge yet. It is self-imposed because I want to create an original print. But to do the print, I need the drawing. Perhaps you're wondering what it is I am trying to draw that has me pulling my hair out. Must be something complicated, right? Wrong. Eight stick figures. That's it. Eight stick figures. And I'm coming up short. Heads are out of proportion. Arms and legs look wrong. Feet, really, what am I to do with the feet? Hands in pockets or behind backs so that I don't even have to think about them. Who would've thought eight stick figures would prove so damn hard.
So I have resorted to drawing them upside-down. What this does is makes the drawing less about the subject and more about the lines and shapes. All of a sudden you are no longer drawing a person, but rather a squiggly line here and a curved line there. I have a way to go, but I'm not going to give up yet. I will draw a good stick figure (in the words of Gargamel) if its the last thing I ever do!! 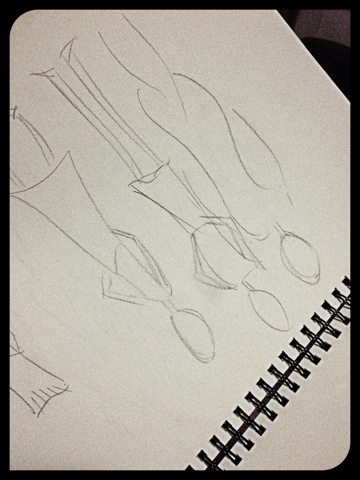 Email ThisBlogThis!Share to TwitterShare to FacebookShare to Pinterest
Labels: Drawing

I am so lucky to be surrounded by creative, community minded people. At the start of this year I launched what I thought was going to be a 'small community photography project'. It is not small.
Shutterbugs '13 works like this: each month I nominate a date on which the Shutterbugs (located all over the world) are to take a photo. The photo can be of absolutely anything, providing it is legal. They then email their photo to me and I share it in an album on Facebook.
So many things about this project have completely amazed and astounded me. Over 130 people are willingly involved and I receive about 80 photos each month. The quality of the photographs is outstanding. There are three professional photographers participating in Shutterbugs, but if you looked at the photos you would think there were many more. There is an amazing sense of community that continues to grow and grow. When I post the album each month, Shutterbugs go to town, commenting on and 'liking' each others photos. My favourite story involves two Shutterbugs who met (for the first time) at a function and when they each realised that the other was involved in the project, they started talking like old friends. One even confessed after the fact, to feeling like she was part of a secret society and wishing that she had some sort of handshake known only to the Shutterbugs!
The thing I love most about Shutterbugs is not the photos, but rather, it is the communion of a complete group of strangers who share a common interest and come together once a month to be a part of something really special. 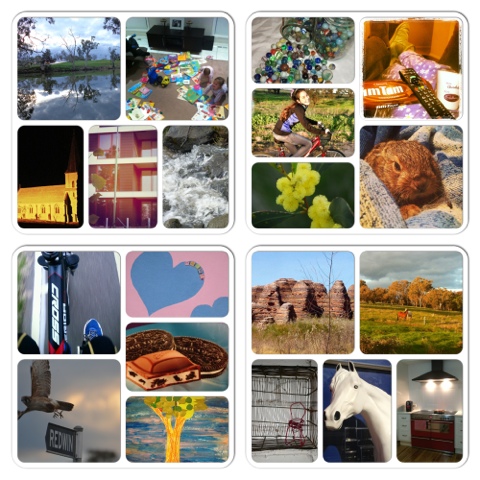 There's a thousand other things I could rave on about, like mindfulness and the uncanny appearance of distinctive themes (even though none are ever set) but that's another post for another time.
For now, I just wanted to say thanks to my Beautiful Bugs for being so giving and enthusiastic and talented and committed and clever and so bloody creative! My Bugs (and yes, they are 'my' Bugs) inspire me and I am eternally grateful for their presence in my blessed life.
Posted by nickya73 at 05:27 No comments:

The cheapest therapy in town

When things are mental there is sanity in art. Kath taught me this. Switch off that left side brain, stop the chatter, get in the zone, lose time.
I started art classes about 18 months ago, probably at a time when I needed it most (although I didn't know it then). At first, my only bravery was actually turning up each week. We were doing 'clay' and I certainly wasn't brave enough to shape anything for myself. The one bird I made of my own design became fondly known as 'the ugly bird'. Despite its ugliness, it still sits on my balcony watching the river roll by.
In the time since the 'art start', I have changed. I am now a little braver. I have a few new skills. I adore 'show and tell'. I love the company of my fellow students. I soak up as much as I can from Kath.
Sometimes, when Wednesday rolls around, I know it will be a push to get there, but I always make sure I get there. Everything else (except maybe a Carroll Cup grand final) comes second to art class. I then cruise through the rest of my week, plodding away on a project, stopping the chatter, getting in the zone, losing time.
Without question, it's the cheapest therapy in town. 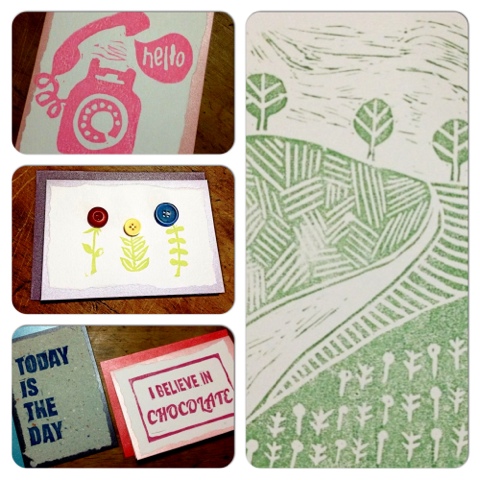